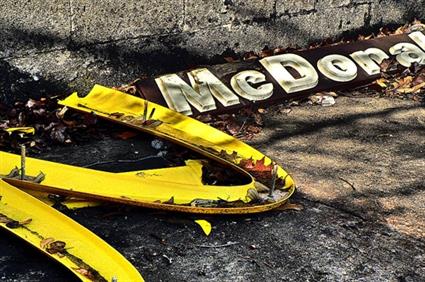 In 2003 McDonald’s’ share price fell to 12$ - less than half of its value when trading ended on the first day after the company went public in 1965 and an all-time low.

McDonald’s had turned stale, sales had plummeted and new products were rejected by consumers. The burger joint was constantly under fire from nutritionists, consumer activists and health organisations – and as accusations of causing obesity flew, McDonald’s profits withered.

The McDonald’s franchise had seemed set to an unstoppable expansion mode, opening one outlet worldwide every 4.5 hours. However, in the final quarter of 2002 the McDonald’s Corporation announced its first quarterly loss in the 38-year history of McDonald's, and the board agreed change was necessary for the company to maintain its pre-eminence in American culinary culture.

According to WikiInvest, an online investor portal, McDonald’s’ comeback was driven by a two-pronged strategy. “In the US, McDonald’s focused on increasing sales at existing locations by renovating stores, expanding menu options and extending store hours,” it explains. “Internationally, McDonald’s expanded aggressively, opting to franchise rather than operate its new locations, providing new income with little overhead.”

After a brief hiatus, McDonald’s renewed its breakneck growth and since 2003 has grown by a third, maintaining growth even during the global slowdown between 2007 and 2010. In fact, the company is benefiting as many consumers in the West scale down their eating costs from expensive eateries to cheaper fast-food options. The resurgence was also thanks to McDonald’s revamped menu, with more healthy options, deft marketing and improved management.

The McDonald’s board ousted Jack M Greenberg as chairman and CEO in 2003, replacing him with the very man he himself and succeeded only a year before. Despite overseeing McDonald’s expansion back in the 1980s and 90s, Jim Cantalupo showed a keen understanding of why McDonald’s needed to change its approach in the new century: “The world has changed. Our customers have changed. We have to change too,” he reflected.

Cantalupo’s appointment was widely seen as a regressive step by shareholders, one of whom derided the company as “inbred” for refusing to hire externally. Undeterred, the new CEO started his latest tenure by announcing the closure of more than 700 restaurants, mostly in the US and Japan, which resulted in the elimination of 600 jobs.

Cantalupo also launched a scheme, known as ‘Plan to Win’, which outlined McDonald’s strategy for the following three years. Aiming to gear the company to a more health-aware fast-food industry, the turnaround plan introduced system-wide changes to the company’s products, operations and marketing.

A global MTV-style advertising campaign, which coined the catchy slogan ‘I’m lovin’ it’, was launched in more than 100 countries – and the public were indeed ‘lovin’ the healthier image, with salads introduced in 2003 contributing to a recovery in sales.

By 2004 McDonald’s announced a 25% profit increase on the corresponding quarter in the previous year, and sales reached a 17-year high. The recovery had been as dramatic as the decline was brief.

McDonald’s rapid turnaround in fortunes represented a triumph of balancing the need for change with the need to retain core qualities that make a brand popular in the first place. Adding healthy options to the menu but retaining the burger-and-fries core and overhauling the decor, McDonald’s managed to attract some of the middle class professionals who hitherto were scornful of the chain, without alienating those who had never deserted it in the first place.